If you use a device running an Android version prior to 7.1.1, beginning January 11 your access from that device to this site and many others will be impaired. For details and solutions, see this topic.

LRP1 is a master regulator of tau uptake and spread

Insights and discussion from the cutting edge with reference to journal articles and other research papers.
Post Reply
2 posts • Page 1 of 1

LRP1 is a master regulator of tau uptake and spread

Abstract
The spread of protein aggregates during disease progression is a common theme underlying many neurodegenerative diseases. The microtubule-associated protein tau has a central role in the pathogenesis of several forms of dementia known as tauopathies—including Alzheimer’s disease, frontotemporal dementia and chronic traumatic encephalopathy1. Progression of these diseases is characterized by the sequential spread and deposition of protein aggregates in a predictable pattern that correlates with clinical severity2. This observation and complementary experimental studies3,4 have suggested that tau can spread in a prion-like manner, by passing to naive cells in which it templates misfolding and aggregation. However, although the propagation of tau has been extensively studied, the underlying cellular mechanisms remain poorly understood. Here we show that the low-density lipoprotein receptor-related protein 1 (LRP1) controls the endocytosis of tau and its subsequent spread. Knockdown of LRP1 significantly reduced tau uptake in H4 neuroglioma cells and in induced pluripotent stem cell-derived neurons. The interaction between tau and LRP1 is mediated by lysine residues in the microtubule-binding repeat region of tau. Furthermore, downregulation of LRP1 in an in vivo mouse model of tau spread was found to effectively reduce the propagation of tau between neurons. Our results identify LRP1 as a key regulator of tau spread in the brain, and therefore a potential target for the treatment of diseases that involve tau spread and aggregation. 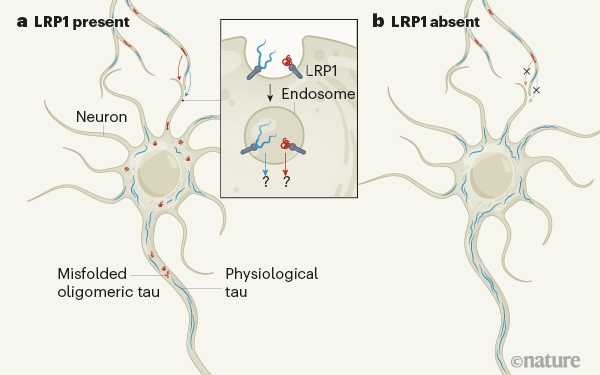 
I haven't digested it all, but it seems fairly consequential.

Re: LRP1 is a master regulator of tau uptake and spread

Saw this and agree. It seems important!
Concerned, but hopeful. Introverted, but will talk about science.
Post Reply
2 posts • Page 1 of 1

Return to “Science and Research”

Users browsing this forum: No registered users and 17 guests